skip to main | skip to sidebar

Finally this nasty, alcohol imbued and drug-abusing cluster bomb is OUT NOW! Each band one song. While both playing the same style of dirty, grooving sludge, they still emphasize their own approach and blend.

Taunt with a monumental, 1 riff based but very varied song that crumbles every piece of dope. Foaming with rage, Frogskin on the other hand blow out a rumbling blast of a song, spitting acid in nearly 8 minutes.

While Taunt are self-destructive and desperate, Frogskin concentrate on suffering, pain and anger.

Both smashing in the mud as hell, so fasten your seatbelts! 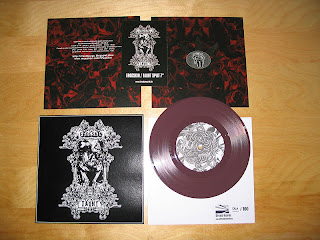 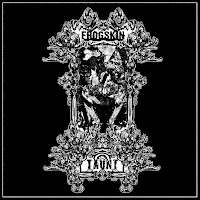 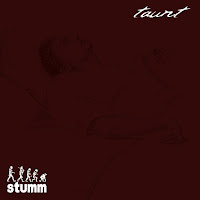 Taunt / Frogskin - Split 7":
- Yeehaw motherfuckers! More sludge doom to get our hands and, especially our minds, dirty. First up in this split 7” by Streaks Records is Finland’s Frogskin. The song included here is as far as I can tell their second recording since their 2005 demo and features a very acidic sound. Main and most popular reference, the super mighty Iron Monkey. Surely, there is more to Frogskin than that and they prove it by rudely offering over seven minutes of the most disgusting sounds out there. For the better half of it, Frogskin just bashes away intermittently; two giant thumps, two colossal fat ass bottom guitar strums and some grandfatherly vocals the likes of which haven’t been this scary since the Wizard of Oz. It’s all very disturbing and dandy until the second part of “Squirm” kicks in; from then on things only get more distressing with feedback taking the spotlight and the whole thing starts disintegrating by bits… Tasty stuff.

Taunt on the other hand are even more caustic and rudimentary. They are a German two piece and their songs “B.L.K.” clocks in at over six minutes. It should have been longer because for the first two minutes it’s just a build up. You know something bad is looming in the nearby horizon but what is it? More doom sludge from Taunt; crude vocals, a basic thick guitar chord that’s strummed and let for distortion to squeeze its last sound, only to have the axeman strumming it again…and again….and again. Great stuff. As far as I can tell, Taunt only have one other recording; a split with the band Stumm. Auspicious stuff. Looking forward to hearing more.
(DEAF SPARROW Zine)

Taunt / Stumm - Split 7":
- I must be going fucking blind, because I thought that this split 7" was with Stumm and Taint, the UK post-hardcore band that has an album out on Rise Above. But it's not Taint, it's Taunt, a German two-piece. What a difference a vowel makes. Anyways, this 7" is one of the heaviest 7"s I've gotten in in recent memory, this thing feels like it's 180 gram vinyl or something close, total Euro dinnerplate pressing. But it would have to be pretty thick to be able to contain the 14 minutes of evil-sounding, monstrous tarpit sludge that Calculon has captured on here. Taunt, normally a guitar/drums duo, brought in a session bassist to record their track, a filthy, primitive low-fi ultradirge, a simple two-chord riff grinding into infinity, spare drum hits thunder out every couple of seconds, the feedback and decaying riffs ozzing into Taunt's dead spaces like disease. There are no vocals, and it plays like a bludgeoning troll mantra, dropping your consciousness into a bleak filth pit. Stumm had previously flattened me with their I album on Aesthetic Death from 2006, so it's good to hear some new damage from the Finnish doomsters...their track "2x6" is another brutal dose of dank sludge, vicious feedback giving birth to huge, crusty riffage stinking with the DNA of early Celtic Frost, churning slowly over the tracks lenghty running time, and finally erupting into an unexpected midpaced thrashout at the end of the song. Relentlessly crushing sludge/doom, and crucial for fans of Thergothon, Khanate, Wreck Of The Hesperus, Coffins, Bunkur, Moss, Monarch, and similiar glacial plaguebringers.
The record comes in a burgundy sleeve printed with eerie images and text quotes that reference states of clinical depression and emotional despair - quite fitting for the intense downer vibes that these bands project.
(CRUCIAL BLAST)

Taunt / Stumm - Split 7":
- Taunt are a German two-piece, who've drafted in a session bass-player for this recording. It must have been a crowded session, because it sounds like they're playing in an old shed with newspaper over the windows. They have a dirty, lo-fi sound, and don't bother messing about with more than two chords - the object here is to produce something which sounds nasty, not to astound the world with virtuoso fiddliness. The drumming holds it all together - chords are held long enough to let the volume begin to fade, and the drums are spare but interesting; the old adage "It's not the notes, but the spaces between the notes" is particularly apt here. There are no vocals, and essentially no variation in speed or dynamic, but somehow this could go on for another 10 minutes, and it'd still be compulsive listening.
Stumm's contribution starts with the nicest bit of feedback I've heard in ages, played off a big meaty riff. There's no real change in pace from the Taunt track - in fact, apart from a definite thickening of the sound (not so much shed as stinking cellar - you can practically hear the building vibrating above this Finnish three-piece), there's nothing much different happening. This time, though, there are goblin-in-a-tunnel vocals, largely (thank God) free of the horrible reverb which ruins many bands' efforts. The track is slow, sludgy, heavy as hell, and totally compulsive. But with only a minute to go, there's an unexpected torrent of chords at what could almost be medium pace - and then it's over, and you'll do what I did and turn it over to start again.
A very cheeky little number, this 7". Just enough to get the juices flowing. Evil teasing bastards.
(NINEHERTZ)

Taunt / Stumm - Split 7":
- This 7" was initially released in June 07, but due to problems with the 1st pressing, Calculon decided to do a re-call and get the record re-pressed and re-released in August 2007 which is how it should have been first time around, so if anyone still has a copy of the 1st pressing, please contact Calculon and they'll happily replace this for you.

Right onto the music in question, I was really looking forward to this slab of doom as although I'm familiar with the awesome Stumm, I'd never heard Germany's Taunt previously who start the proceedings off with their track 'I' which rumbles into life with its heavy, slow & resonating chords which are backed up with a tempestuous drum pattern that helps form the structure of the whole 7 ½ minute track. There are no vocals present on this track, instead Taunt rely on the journey the music takes you in, which essentially has little in the way of change, just punishing despondent riffs which build then fade while the drums form the backbone, holding the whole soundscape together.

Flip over and we're introduced to Finland's Stumm and like Taunt, deliver us with just over 7 mins of punishing tortured doom, their track '2x6' greets us with a wall of feedback which morphs into a monstrous opening riff and you suddenly realise just how fucking heavy this band are! Coupled with the agonising screams of vocalist Jukka which really help suck you in, but then just as you totally don't expect it, they hit you with a barrage of riffs, screams & cymbal heavy drums before fading out with despondent feedback.

All in all, a cracking little release from Calculon Records and comes highly recommended for fans of Grief, Corrupted, Ocean, Winter etc.
(THE SLEEPING SHAMAN)
Startseite
Abonnieren Posts (Atom)